We had a great weekend! Saturday was cleaning day and then, we had some friends over for game night. We had some pizza while watching the kids run (and crawl) around! We also had some fruit with dip (thank you so much Catherine!!!! I think I ate enough of that, wow!!). We started off playing euchre, girls against the guys. The guys ended up winning (grr). Then, we started on what turned out to be, a 5 hour game of Monopoly! Holy Cow! Catherine went out, then me. As we sat and talked about scrapbooking, the guys were playing until 1:30 am. Jeff was the big winner of that one! All of this game playing has me realizing I have not played enough games in my life. That is all going to change now! It is so much fun! 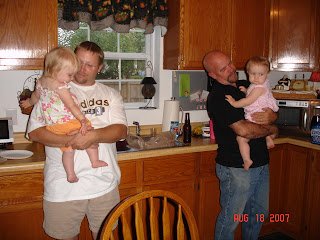 Sunday we took Jaden to see Underdog. That was a great movie! Jaden showed so much emotion. He even started crying when he thought Underdog had died. He was happy when he found out he was okay. We took him to the pet store and book store afterward. We also went to Cheeseburger in Paradise. That was fun. There was live music and I especially enjoyed the chocolate nachos. Jaden even got an extra bowl of ice cream from the waitress! Afterward, she gave him a little gummy cheeseburger candy, and he said he was very proud of her. He says the cutest things now.
We picked Cassidy up from Grandma and Papa's and headed to church. We sat down and found out we would be getting in our cars and going somewhere to help people in our community. We picked "taking cookies to the firemen in Riley and Brazil". Jaden got a kick out of that. He got to see the big trucks and even got some stickers. He also asked a couple of questions. He is getting so smart!
I have an update on the homeschooling situation. I have been talking with Jeff and praying so hard about this. I have decided to start homeschooling him next year. I have had so many signs this week that it is the right thing to do. 1. Jaden started saying he doesn't want to GO to school. 2. He keeps getting his workbooks out and saying "I am doing my homework". 3. He is very eager to learn and seems to listen and pay attention to me. There are so many other reasons, but those really stuck out this week. We started on a preschool workbook this week and hope to keep doing them all year. I am hoping he might get some for his birthday!
I hope everyone has a great week!