I had an unexpected thing happen today. I met someone who likes Clay as much as I do! I found her on one of the message boards. She is going to be in the same group we are going with to the concert. She lives in the same town as me! I called her and we talked for 30 minutes, not just about Clay, but almost! It's great to talk to someone who has the same appreciation that I do for him!
My cake class was tonight, and I think I did the final cake pretty well. It is just a white cake with buttercream icing. The flowers are made out of royal icing. It was a fun cake to make, but that basketweave takes a long time! (Jaden took the picture of me!) 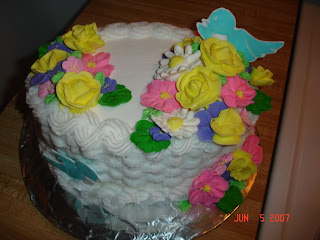 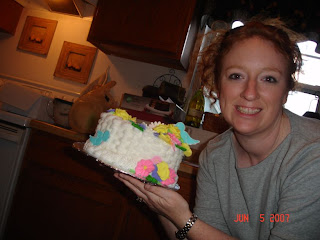